Looking for the best apps for your iPad? You’re in the right place. While this article contains the best apps for different leisure, including movies, music, games, and even educational apps, you don’t have to download all 25 of them. But you could take a peek at what you would be missing if you don’t.

Crackle is like the best movie app right now. It not only delivers great movies and TV shows with an interface that stands up to Hulu Plus and exceeds the one found in the Netflix app, but it does so as a free download with no subscription costs. That’s right: free movies and TV shows. That’s makes it one of the best free apps on the App Store. 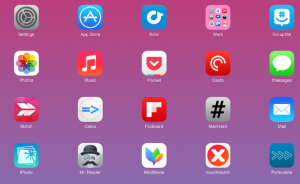 Apple began giving away the iWork suite of office apps to anyone who purchased a new iPad or iPhone after the release of the iPhone 5S in late 2013. The great part about this deal is you don’t even need to buy the latest generation iPad, you simply need to buy a new iPad. The iWork suite includes a word processor (Pages), spreadsheet (Numbers) and presentation software (Keynote).

Though the iWork suite isn’t quite as complete as Microsoft Office, it’s not overpacked with features either. It’s straightforward.

Facebook works perfectly the iPad’s web browser, but to get the best experience, you should download the official app. And if you like sharing your photos and videos, you should also connect your iPad to Facebook. This is done in the iPad’s settings and will allow you to tap the Share button in Photos and send an image to Facebook. You can also send web links from Safari, update your status using Siri and other neat tricks.

When Apple replaced Google Maps with its own Maps app, it didn’t work out quite well. Apple Maps has come a long way since its initial release, but many people still prefer Google Maps. If you want to use your iPad as a GPS, or simply map out your route before you get into the car, Google Maps is definitely one of the must-have apps on the App Store. Apple’s Maps app might be pretty but Google Maps is still the most functional.

Evernote works similar to the Notes app that comes with the iPad but includes a number of super-charged features. So, Evernote is cloud-based, so you sign in to your account to retrieve your notes. This means you can sign in with your PC, iPad or even Android device. You can create notes and task lists, email them from your Evernote account and organize them by tags.

Pandora for the iPad is both simple and sleek, offering the versatility of the website without too much clutter, and allowing you to play the music in the background while you do other things. When you combine Pandora with the ability to use Home Sharing to gain access to your entire music collection, it’s easy to see how the iPad can replace your home stereo. Pandora is easily one of the best apps available for the iPad. And (like the rest of this list) it is free.

Want to find some new and great restaurants? Yelp will be of great help. Combined with a great audience of reviewers, you’ll not only find out which restaurants are nearby, but you’ll be able to choose the best. And for most restaurants, you can even get a peek at the menu.

Yelp also works on almost any other type of business, so you’ll be able to find a dry cleaner or an auto repair shop.  And you can also help others with your review while you’re at it.

Dropbox works with most devices, so you can use it to share files between your PC and laptop, your laptop and your iPad or your iPad and your iPhone. And it’s a more sophisticated and easier-to-use solution than iCloud Drive once you get it up and running.

The iLife suite includes Garage Band, iPhoto and iMovie. Similar to iWork, Apple made the iLife apps free for those who bought a new iPad after the iPhone 5S was released. Garage Band is a music studio that includes a few virtual instruments, so you can both play with it and record with it. iPhoto will let you edit photos on your iPad, and iMovie is a video editing package that includes a number of templates, so you can make yourself the star in a trailer for a movie if you want.

Want to watch TV on your iPad? No problem. While sources like Netflix and Hulu Plus offer a wide selection of movies and TV shows, you may even be able to go further than that and get live television on your iPad.

Many of the bigger cable companies have an iPad solution that will let you watch some of your favorite stations.  And speaking of those stations, many of them have apps as well. You will usually need to authenticate your cable subscription by logging into your cable company’s website, but once you get it set up, you can stream on-demand shows and sometimes even watch live TV.

Like Google Maps, YouTube used to be one of the default apps on the iPad. But when Apple had their break up with Google, YouTube disappeared. The YouTube app is great for those who want an app-based experience when browsing YouTube. The app will also be used as an external player for YouTube videos, so if you browse YouTube in the Safari browser, videos will open in the YouTube app.

Are you ready to turn your social experience into an interactive magazine? Flipboard ties together Facebook, Twitter, Flickr, and other social websites with traditional news and magazine sites like CNN and Sports Illustrated to create a magazine tailored to your own social experience. If you think Facebook is cool or Twitter is informative, you should see them turned into a magazine.

Speedtest allows you to test the overall speed of your Internet connection measured in megabits-per-second (Mbps). While it may sound like something only a techno-geek would want on their iPad, it’s actually quite handy for anyone, especially if you have an area of the house where you don’t get a good Wi-Fi signal. Speedtest will help you determine just how bad your connection gets and help you test solutions.

If you need to get your news fix, USA Today is one of the best news apps in the app store. And not only do you get a free dose of daily news, but you’ll also get a daily crossword puzzle. Do you prefer your news to be more visual? CNN’s iPad app is made for you. And for those who like news from as many different sources as possible, Fluent News does a great job of bringing a cornucopia of news feeds together in a streamlined app.

Now that we have your news squared away, it’s time to get to the important stuff: fake news. The Onion’s recently released app is just as funny as you would expect, combining a newspaper style with a host of hilarious videos. The Onion is definitely the funniest app in the app store.

Dictionary.com will give you one of the best online dictionaries without paying the high cost of an actual dictionary, which could cost upwards of $25. Along with the dictionary comes a Thesaurus and a Word of the Day. You’ll also get vocal pronunciations of each word, so you can make sure you are saying it right.

Pandora may be the best music app for creating your own custom radio stations, but it won’t help you listen to real stations. iHeartRadio is a combination of both, allowing you to create custom stations based on a favorite band or playing real radio stations from around the world.

Do you love to cook? The iPad is a handy helper in the kitchen plus you can download Epicurious, which is packed with over 30,000 recipes. Now, that’s a lot. And it will cost you a grand total of a download. For all the cooks out there, Epicurious is among the great apps available on the app store.

Mint is the best personal finance and budgeting app available on the iPad. So, Mint will automatically collect data from your accounts and put it into easy to digest groups, such as breaking your spending down into food, gas, rent, etc. This makes it easier to set budget goals and determine how well you are doing with your personal budget. You’ll need a Mint.com account to use the app, but it is free to sign up.

For students and lovers of history or science TV channels, Khan Academy is a great app that includes lessons that span a wide variety of topics and classes. It even helps with SAT preparation. Anyone can use it as a virtual classroom.

Temple Run 2 combines the unique controls of the iPad with frantic action and addictive gameplay. The sequel to the game that really defined the endless runner genre is a whole lot of fun in an unassuming package.

If you own an Apple TV or if you stream a lot of music from iTunes on your PC, Remote is a must-have app. It is basically a remote control for Apple TV, which is great because the rather small remote that comes with Apple TV is easy to lose. The Remote app will also let you play music from your PC if you have iTunes loaded and Home Sharing turned on.

FitnessClass has a vast collection of exercise routines available as either 30-day rentals or purchases, and you can preview each routine to see what you are getting for your money. For anyone that likes to mix up their routines while keeping fit, this is a great app to download.

LOOPT – narrow down results and options to your nearest location.