What is a Certificate of Deposit (CD)?

Certificate of Deposit also known as CD is a bank account with a fixed interest rate, which is generally higher than that of regular savings accounts, and a fixed date of withdrawal referred to as maturity date. Certificate of Deposit is federally insured and do not typically have monthly fees, but most have an early withdrawal.

A CD is quite different from a traditional savings account. With a CD, you typically consent to leave your money in the bank for a set period of time, known as the term length, during which time you can’t access the funds without paying a penalty. Term lengths can be short as a few days or as long as a decade, even though the standard range of options is between three months and five years. The longer the term length then the longer you will commit to keeping your money in the account and thus with the bank, the higher the interest rate you will earn. 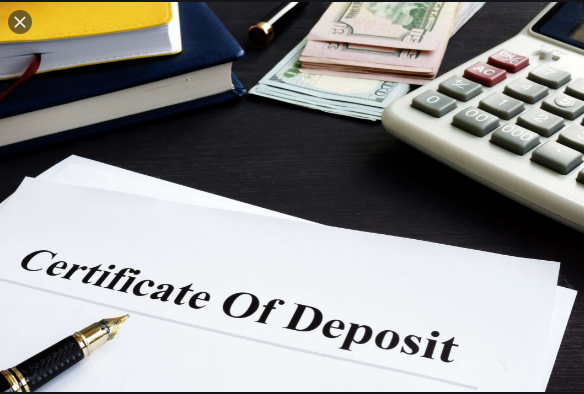 Types of Certificate of Deposit

Liquid or No Penalty CDs

With liquid CDs, you can withdraw your funds early without paying a penalty. With this flexibility, you can move your funds to a higher-paying CD if the opportunity presents itself, even though it comes at a price. However sometimes you may be limited to when you can withdraw funds and how much you can take at any given time with liquid CD, and you may also be required to invest a greater amount upfront than with other types of CDs. Thus you have to ensure you understand any restrictions if you are thinking of investing in a liquid CD.

Bump-up CDs offer a benefit which is similar to liquid CDs. With it, you do not get stuck with a low return if interest rates rise after you buy one. You get to keep your existing CD account and switch to the new, higher rate offered by your bank.

Step-up CDs come with regularly scheduled interest-rate increases so that you are locked into the rate that was in place at the time you bought your CD, and increases might come every six or seven months.

Brokered CDs are sold in brokerage accounts and can be bought from numerous issuers and kept all in one place instead of opening an account at a bank and using their selection of CDs. This offers you the leverage to pick and choose, but brokered CDs come with additional risks.

You also have to ensure that any issuer that you are considering doing business with is insured by the FDIC.

Jumbo CDs have very high minimum balance requirements, typically in excess of $100,000. It is a safe place where you can pack a large sum of money. Because as much as $250,000 of it is FDIC-insured and. You will earn a significantly higher interest rate.

CDs mature at the end of their terms, leaving you to decide what next to do. You will get an alert from your bank as you near this date, and offer you several options. If you do not take action and your CD was subject to automatic renewal, your money will be reinvested into another CD. If you were in a six-month CD, it would be rolled over into another six-month CD, and the interest rate may be higher or lower than the rate you previously were earning.

Even though some savers might want the higher rates of three – to five-year certificate, they may be skeptical of tying up their money for that long. This is where ‘laddering’ can be beneficial. With laddering, you invest proportionally in a variety of term lengths, then, as each shorter certificate matures, you reinvest the proceeds in a new long-term CD.

ALSO READ:  NJ Snap – NJ SNAP Eligibility - How to Apply for The Welfare

Low or no fees

CDs may have a low-to-no fee structure, and some banks do not charge a monthly fee to hold your money in a CD.

CDs can help you save for large, one-time expenses. It can offer you a safe place to park your funds for a set period that’s aligned with your financial goals.

You can shop around

Also, you can shop around and compare the best rates. You may also find higher than usual rates if you deposit a sizable amount of cash in the form of Jumbo CDs.

Your money is insured

The FDIC insures CDs up to $250,000. This is an effort by the federal government that guarantees that you will never lose your principal. Owing to this, they have less risk than bonds, stocks, or other more volatile investments.

The most prominent disadvantage with CDs is that your money is tied up for the life of the certificate. You will be required to pay a penalty if you need to withdraw before the term is up.

You are at a risk that interest rates will go up on other products during your term. If you sense that the interest rates are rising, you can get a no-penalty CD. This will allow you to get your money back without charge any time after the first six days.

APYs are behind inflation

CDs do not pay enough to keep up with the rate of inflation.

Change Your Credit Card Due Date | A Guide on How to Select the...