Opportunity Cost Definition:- Opportunity cost is the profit that is lost when one alternative is chosen over another. It is a useful concept that is used as a reminder to examine all reasonable alternatives before a decision is reached. Most times, opportunity costs seem to be easily overlooked because they are unseen. 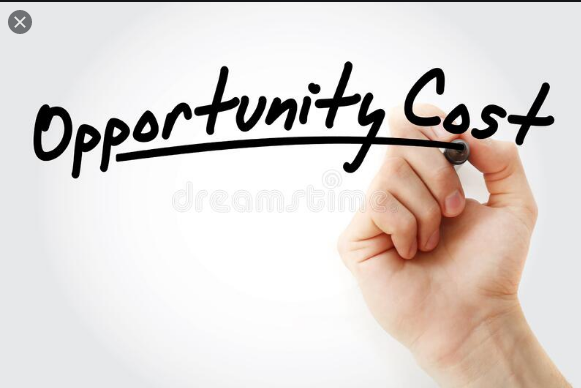 Opportunity cost does not necessarily involve money and can also refer to alternative uses of time.

Opportunity costs cannot always be fully quantified at the time when a decision is taken, rather the person making the decision can only roughly estimate the outcomes of various alternatives. This implies that imperfect knowledge can lead to an opportunity cost that will only become noticeable in retrospect. This becomes a particular concern when there is a high variability of return.

Note however that the concept of opportunity cost does not always work, because it can be too difficult to make a quantitative comparison of two alternatives. Rather it works best when there is a common unit of measure, like money spent or time used.

As earlier stated, the opportunity cost is not an accounting concept, thus does not appear in the financial records of an entity. It is solely a financial analysis.

The formula for calculating an opportunity cost is the difference between the expected returns of each option.

The idea behind opportunity cost boils down to the limited resources of business owners. This implies that you have a finite amount of time, money, and expertise, thus you can’t possibly take advantage of every opportunity that presents itself. If you decide on one, it automatically means you have to forego the other. Thus the value of those others is your opportunity cost.

ALSO READ:  TD BANK ROUTING NUMBERS - one of the biggest banks in America.

Implicit costs (also known as implied, imputed, or notional costs) are the opportunity costs which are not reflected in cash outflow but rather implied by the choice of the firm not to allocate its existing (owned) resources, of factors of production, to the best alternative use.

Opportunity cost has an important place in economic theory, and the concept is dependent on the fundamental fact that factors of production are scarce as well as versatile. Human wants are unlimited and the means to satisfy these wants are limited as well even though they are capable of alternative uses.