What is the Equal Credit Opportunity Act?

Equal credit opportunity act (ECOA), is an act that requires banks, credit card companies, and anyone else involved in lending to make credit equally available to all creditworthy customers.

ECOA prohibits credit discrimination on the basis of race, color, national origin, sex, marital status, age, or as a result of a person receiving public assistance in whole or in part. It also prohibits action against anyone who has exercised any rights under the Consumer Credit Protection Act.

It further states that when determining a consumer’s creditworthiness, financial institutions instead consider the following: income, expenses, debts, and credit history. ECOA permits creditors to ask for certain information to help in the documentation process. But even that is limited by certain rules.

This Act applies not just when credit is denied, but also applies if a consumer gets less favorable borrowing terms like a higher interest rate. ECOA shields borrowers in activities before, during, and after the extension of credit.

When Was ECOA Passed?

ECOA was passed in 1974 by the house of Representatives by a vote of 282-94. It then moved to the Senate, which passed an amended version 89-0. Thereafter, the House approved the amended version 355-1 and the bill was signed into law by President Gerald Ford on Oct 10, 1974.

Formerly, the Federal Reserve Board was in charge. However, that role was transferred to the Consumer Financial Protection Bureau, which was created in 2011 as part of the Dodd-Frank Act.

However, that piece of legislation has been rolled back in 2018 after Donald Trump promised to “do a number on Dodd-Frank”. Congress accepted and passed the Economic Growth, Regulatory Relief, and Consumer Protection Act on May 22, 2018.

This dealt largely with banking regulations, though, and the proponent is of the opinion that it should not adversely impact the agency’s role when it comes to ECOA guidelines. 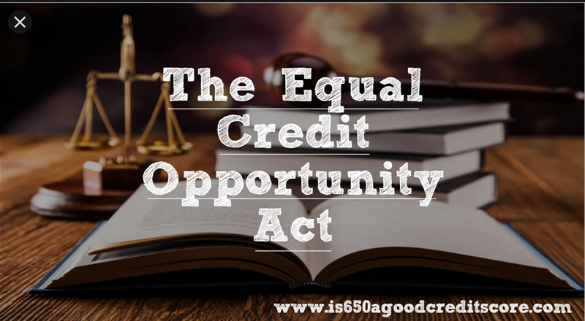 Regulation B describes lending acts and practices that are specifically prohibited, permitted, or required. Official staff interpretations of the regulation are.

The ECOA and Regulation B allow creditors to establish special-purpose credit programs for applicants who meet certain eligibility requirements. Generally

The Equal Credit Opportunity Act promotes the availability of credit to all creditworthy applicants without regard to race, color, religion, …

ECOA states that creditors are to:

Organizations who are discovered to have violated the ECOA could potentially face class-action lawsuits by the Department of Justice (DOJ). This lawsuit will be carried if the DOJ or any affiliate agencies recognize a pattern of discrimination.

On the other hand, the Consumer Financial Protection Bureau (CFPB) seeks to enforce ECOA with other federal agencies, like the Federal Reserve Board, the Federal Deposit Insurance Corporation (FDIC), and the National Credit Union Administration (NCUA). If any organization is found guilty, they may have to pay out punitive damages which can be significant, and cover any costs incurred by the person who is wronged.

ECOA was passed to protect women and minorities from being discriminated against by credit card companies.