Home Bank & Financial Exposure at Default (EAD) – loss a bank is exposed to as...

Exposure at default (EAD) is the total outstanding value recorded. By the bank when a loan defaults. Usually, financial institutions. Calculate their risk using the internal ratings-based (IRB) approach. Banks use internal risk management. Default models to estimate each EAD system. This same principle can be calculated outside of the banking. Industry as credit exposure just like EAD. 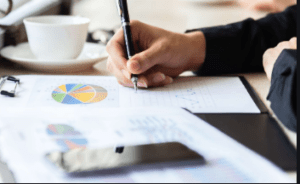 EAD is the calculated amount of loss a bank is exposed to when. Borrowers default on a loan. From each loan, the overall default risk is calculated. And used by lenders to assess the risk they are exposed to. EAD continually changes dynamically when the borrower. Continues making payment to the lender till no loss is evitable.

There are basically two methods to determine exposure at default. The first method is often used by “Regulators” which is known. As the first approach (Foundation internal ratings-based, F-IRB). The second approach is called. Advanced Internal Ratings-based (A-IRB). The A-IRB is flexible according to the banking institutions. Fortunately, banks disclose their. Risk exposure which is statistically based on data and internal analysis, e.g. borrower’s characteristics and product type.

A loan default value can be overseen either as. The probability of default or Loss Given Default. What does this mean?

A Probability default is an analysis used by. Financial institutions other than banks, to calculate their expected loss. It serves as a measure to determine each percentage likely to. Be found in a loan defaulted. This PD can be obtained by assessing past-due loans. This is done by running an analysis of similarly rated loans; remember. That the calculation is for a specific time frame. After the calculation the PD is then ushered to the risk level. Having one PD percentage on each risk level.

Now the Loss Given Default (LGD) is common to the banking industry. And segment. This is used to measure the expected loss in percentage. However, the LGD represents the outstanding. Amount after an underlying asset has been sold in order to recover default in a loan.

The variables determined from both PD and LGD remains. Valid all through an economic cycle. Then, the lenders will re-evaluate in response to the market composition or portfolio. These re-evaluations could be a result of economic recession. Recovery or mergers.

Now a bank can calculate its expected loss by. Multiplying the EAD by PD and LGD.

It is quite important banks calculate EAD to improve the banking sector’s ability to handle the financial load. This is obtainable through improving risk management and bank transparency. Banking sectors adopted this after the credit crisis of 2007-2008.