There are lots of people involved in getting a project from. Inception to successful completion, that is where a stakeholder comes in. Stakeholders are either an individual, group, or organization. Who is impacted by the outcome of a project. A stakeholder has an interest in the. Success of the project and can be within or outside the organization. That is sponsoring the project and they can either have a positive or negative. Influence on the project. 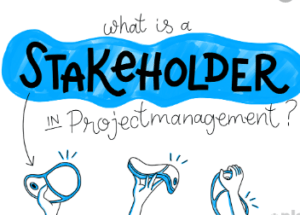 What is a Stakeholder?

A stakeholder is an individual, group, or organization. That has an interest in a company and can either affect or be affected by the business. The primary stakeholders in a typical corporation include its investors. Employees, customers, and suppliers. Currently, the modern theory. Of a stakeholder goes beyond this original notion to include additional. Stakeholders like community, government or trade association.

Here, I will be analyzing the most common types. Of stakeholders, while also looking at the needs that each of them typically has.

Customers are also regarded as stakeholders of a business. This is because they are impacted by the. Quality of service/products and their value.

Employees are stakeholders in a business. Because they have a stake in the company. This is because, they earn an income to. Support themselves, along with other benefits (both monetary and non-monetary). Based on the nature of the business, employees. May also have a health and safety interest.

Suppliers and vendors are seen as stakeholders because they sell goods and/or services to a business and rely on it for revenue generation and on-going income. In most industries, suppliers also have their health and safety on the line, because they may be directly involved in the company’s operations.

Communities also come off as stakeholders in large businesses located in them. Community stakeholders are impacted by a wide range of things, including job creation, economic development, health, and safety. If a big company enters or exists in a small community, there is an immediate and significant impact on employment, incomes, and spending in the area. With some industries, there is a potential health impact, too, because the operations of the companies may alter the environment.

Governments can also be said to be a major stakeholder in a business, as they collect taxes from the company (corporate income taxes), and from all the people it employs (payroll taxes) as well as from another spending the company incurs (sales taxes). Governments stand to benefit from the overall Gross Domestic Product (GDP) that companies contribute to.

Stakeholders are those bound to a company with some type of vested interest, normally for the long term and for reasons for a greater need. A shareholder on the other hand, has a financial interest, but a shareholder can sell a stock and buy different stock or keep the proceeds in cash and they do not have a long-term need for the company and can get out at any time.

The common problem that comes with having numerous stakeholders in an enterprise is their various self-interests may not all be aligned. Since the primary goal of a corporation, judging from the viewpoint of its shareholders, is to maximize profits and enhance shareholder value, and the labor costs are an integral input cost for most companies, a company may strive to keep these costs under tight control. This can have the effect of making another important group of stakeholders, its employees unhappy.