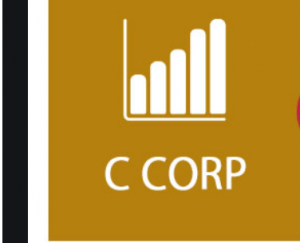 Here, their personal assets would not be affected, as would have been the case if the business was a partnership or a sole proprietorship. If the corporation incurs a debt, the debt is also seen as the corporation’s responsibility. Thus, immediately the business is incorporated, shareholders are safeguarded by the corporate veil of limited liability.

Since the corporation is separate from its owners, it is seen as an individual taxpayer by the Internal Revenue Service (IRS). Because of this, the corporation gets subjected to double taxation, which implies that the profits are taxed once on the corporate level and a second time when they are distributed as dividends to the shareholders.

In case a business is eligible, it may opt for an S corporation status upon incorporating to avoid the disadvantages that come with a C corporation.

Corporations pay corporate taxes on earnings before it distributes the remaining amounts to the shareholders in the form of dividends. Thereafter individual shareholders are subject to personal income taxes on the dividends they get. With a C corporation, you have the ability to reinvest profits in the company at a lower corporate tax rate, which is an advantage.

C corporations are expected to hold at least one meeting each year for shareholders and directors. Minutes must be maintained in order to display transparency in business operations. A C corporation is required to keep voting records of the company’s directors as well as a list of the owner’s names and ownership percentages. The business must also have company bylaws on the premises of the primary business location, and file annual reports, financial disclosure reports, and financial statements.

ALSO READ:  Microsoft Ads - What About Bing? A Guide to Understanding Microsoft Advertising

Small business owners who want to know the difference between S corporations vs. C corporation, should note that the decision mostly boils down to how they want the corporation to be treated for federal income tax purposes.

These are pass-through taxation entities who file an informational federal return (Form 11205), even though no income tax is paid at the corporate level. Here, the profits/losses of the business are instead channeled to the business and reported on the owners’ personal tax returns. For S corporations, tax due is paid at the individual level by the owners.

S corporation is restricted to no more than 100 shareholders, and shareholders must be US citizens/residents, while a C corporation on the other hand has no restrictions on ownership.

S corporations can only have one class of stock (disregarding voting rights), while C corporations on the other hand, can have multiple classes.

No restrictions on ownership: Anyone is at liberty to own shares, including business entities and non-US. citizens.

No restrictions on classes: A C corporation can issue more than one class of stock, which includes stock with preferences to dividends and distributions.

Lower maximum tax rate: The 2017 tax reform act brought down the corporate tax rate to a flat 21% and eliminated the alternative minimum tax.

More options for raising capital: A C corporation can easily obtain equity financing since Subchapter C of the tax code does not impose the same restrictions on ownership as Subchapter S.

The main disadvantage of a C corporation is the tax payment paid on its earnings and then shareholders pay tax on dividends, which implies the corporation’s earnings are taxed twice.

How to Become a C Corporation

I am an SEO person with over five years of experience. I am mostly into product lunch and review. I feed on tech, Dring Tech, and Dream tech. My hobby is knowing how everything works. You are welcome to my world of content development and product review at https://logingit.com/ I am also a financial analyst with an organization. It has been my sincere interest to help people solve their issues on credit cards. There are lots of questions in the mind of many credit card users. These range from which credit card is best? How many credit cards should I have? View all posts by Chris Git